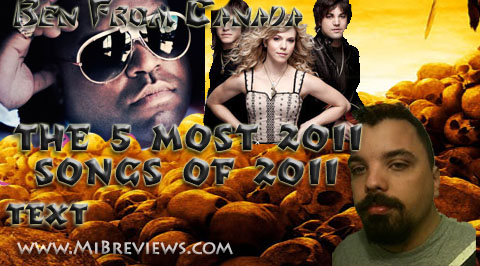 Note: this was originally published here.

At this time of year every year, people start releasing “best/worst X of year that [just passed/is about to pass]” lists. I’ve seen plenty of people I like release their views on last year in music, and that sort of inspired me. See, music (and art in general, but especially music) is a product of its time, and no one is talking about the songs that are really most symbolic of the year that just passed. These are songs that were either big hits last year, or which weren’t quite hits but still symbolized the year in some way. I’m giving the list as a whole 5 mics, FYI, because even though some of these songs are awful, they are perfect at representing this last year. So with that in mind, I present you with the 5 most “2011” songs of 2011.


Granted, this was technically released in 2010, but most of us never heard of it until last spring, when it became a crossover hit, so it still counts. There are probably words for how much I hate this song, but if I were to type them, they’d be so profane they’d destroy my computer and melt my hands. This is amongst the most shallow and awful songs that people thought of as “deep”, made all the worse by the bland country music being played behind Kimberly Perry’s almost-halfway-competent vocals. It certainly wasn’t the most successful pop cultural phenomenon like this of
last year (that would be Twilight) but there’s something uniquely Internet-Age about this country song. Listen to the words.
This is a song about some moderately popular chick hoping for more popularity in death. It’s self centred, “me” oriented, just like, well, everything about the social internet. We’ve been conditioned by reality TV and sites like YouTube, Twitter, tumblr, Facebook, flickr, etc. that people care what we think, even when we have little to nothing of real value to contribute to anything at all. Fame whores populate every fucking internet 2.0 site, often too self absorbed to realize that
they’re repulsive, or why. Listen to this song ‘s lyrics, and you’ll see every one of those vain twats in your head. Unless you’re one of them, but then you probably like this piece of shit song anyway.

Key Line: Penny for your thoughts? Oh no, I’ll sell them for a dollar.

Holy shit, an Anthrax song from 2011! And it’s about zombies! Too bad it wasn’t released 6 years ago when people still cared about metal or zombies. Let’s face it: metal, as a genre, has gone way downhill in popularity, though it still has its fanbase. And zombies? Aside from the popular (yet awful) TV show The Walking Dead, no significant zombie-themed piece of entertainment has been released since the 2009 movie Zombieland, and even then zombies were kind of played out. But you’re probably wondering why I’m bringing this up, or why it’s on this list. Well, look at this here. Social media may have “exploded” in 2006-2010, but in terms of actual use of social media, 2011 was the biggest growth year. 82% growth of Facebook useage in the last business year? That’s astounding! Aside from the boom in Farmville useage, the main thing this has done is lead to a perpetuation of old memes, like Rickrolling, Chuck Norris and LOLCats, as your grandma finally discovers what the rest of us are tired of. What better image for that is there than a metal band full of people in their late 40s singing a song about zombies?

Key Line: In the end of everything, the dead will rise and sing. Fight ‘em ‘til you can’t fight no more.

Like the #5 entry, this song was released in 2010. Unlike that song, I can actually pinpoint the reason for this song’s success, and despite being a brilliant piece of music, it’s not the quality. It’s not even because of the expletive in the song’s title, since radio always plays it as “Forget You” anyway. No, this song is cool because of the combined forces of Gwyneth Paltrow and Glee, which finally showed the world that, hey, this crazy bastard is cool even without that Danger Mouse guy backing him up (although really, most people thought “Gnarls Barkley” was a dude, and didn’t know what he looked like). In other words, if it wasn’t for a ridiculously popular (if shallow and campy) TV series and their Academy-Award-Winning Guest Star, we would have missed out on one of the greatest songs of the last several years. Whereas music used to pretend that it was about sticking it to The Man, and occasionally actually stuck it to The Man, here was a song with a swear word in the title that was explicitly made famous by a show on a major American network and an actress not especially known for artistic integrity. It was a victory cry for the old guard.

Despite that, this song represents something great that happened in 2011. After a seeming eternity of bullshit, stupid club songs (which are not gone from the charts by a long shot) dominating the pop landscape, we had some real breakthroughs. Relatively intelligent, genuinely good music started making a comeback. It’s not much, but it’s a ray of hope for those of us who’ve all but abandoned pop music. Between Adele (a legitimately awesome singer who happens to be an
overweight woman) Bruno Mars (who gave us some great music, and The Lazy Song) and Cee Lo, Billboard’s Top Ten songs of the year actually had some stuff that wasn’t superficial or awful, and artists with some integrity, like P!nk and Lady Gaga also had real success in 2011. Whether or not this trend will continue, only time will tell, but here’s hoping!
Key Line: Fuck you!

This was a year where an economic recovery was stifled by greedy capitalists refusing to act in the best interests of anyone but themselves. It was a year people finally realized they were being screwed over and tried to do something about it. That was Occupy Wall Street, and the Occupy Movement in general, as well as the continuing Arab Spring. This was also a year where the backlash against these movements was horrendous. It was clearly worst in Syria, although the
image that we remember most is the UC Davis Pepper Spray Cop. In the midst of this, Machine Head released their seventh studio album, Unto The Locust. The lead track, Locust, really captures the spirit of the 1%, the rulers of the various despotic countries, and their supporters. Taking liberally from the biblical plague of locusts, the song describes a swarm of insects utterly destroying the land. The lead singer, Robb Flynn, said that this song is about the type of people that wander into one’s life, destroys everything and then simply leaves before anything can be done. Is that not a perfect description of the 1%? The people who, for many years, have been
moving every job they can to poorer areas? Who have exploited third world labour in ridiculously destructive ways since long before we called it the “third world”? And yet…there is hope, both in reality and in this song. And that’s why I think this song is a great symbol of the last year.

This song, and especially its music video, is everything wrong about pop culture now. It’s a club song with spectacularly bad lyrics that sound like they were written by an ESL student (“this place about to blow”). It plays up Kesha’s sex appeal, at least for those who aren’t turned off by her persona, and talks about how awesome she is. It takes modern music’s need to build up a cult around the performers a step further by actually putting it into the song itself (“Drink that Kool-Aid, follow my lead. Now you’re one of us, you’re coming with me.”) This brings phenomena like Beliebers, Team Breezy, Little Monsters, Juggalos and others to cult-like levels, which is basically what any musician who without the family connections an LMFAO or Hot Chelle Rae has to do to make it nowadays. And the music video…aside from the movie Suckerpunch, it’s the most internet thing ever (if “internet” can be used as an adjective, that is). It has “random” “humour” or at least that’s what Ke$ha claims the aim was. Look! Unicorns! Rainbows! A washed up 90s TV star! Self aware jokes, like when she got called “Kedollar sign ha”! Laser guns! LOL!

It’s a worrying sign of things to come. Random humour, popularized by various internet sites and memes, and eventually made mainstream by shit like Family Guy and shittier shit like Tim and Eric Awesome Show Great Job, is out of control. Our love of goofy memes like the ones
that inspired this hot mess of a video has made stars of Jeremih (shitty singer made famous by a weird looking kid named Keenan Cahill, who is only popular due to looking weird) Souljah Boy, Wiz Khalifa, Justin Bieber and Jessica Black. None of those people have done anything but pollute the airwaves and make me regret having ears. Our love of “random humour” has guaranteed that the Cleveland Show will never go off the air while quality comedy shows like Arrested Development limped through 3 seasons (thank fuck there’s a movie coming out!) Thankfully, this song wasn’t a massive hit, unlike her much worse song We R Who We R, though it was considered a hit. Either way, I feel it’s the most 2011 song there is, and that’s why I drink.
Key line: Dirt and glitter cover the floor. We’re pretty and slick, we’re young and we’re bored.

If I prayed, I’d pray for a better musical year this year. However, I really doubt it’ll be significantly better. Please, people, support good music and prove me wrong.