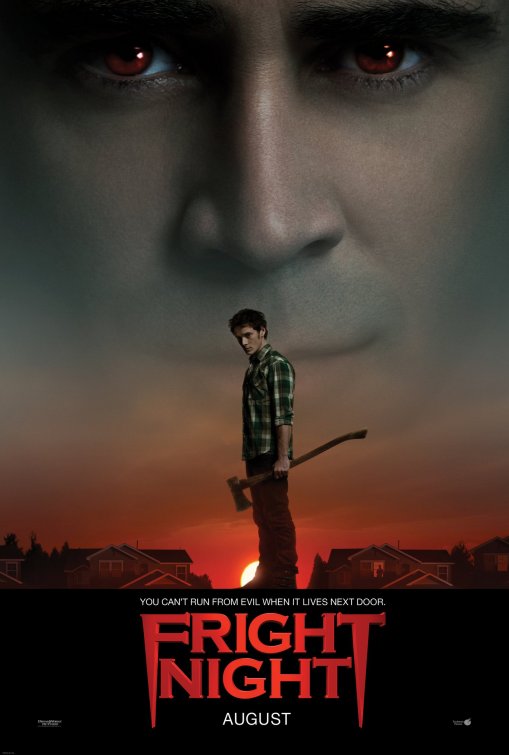 Charley’s got the dream life for any teenage guy: cool friends, the hottest chick at school for a girlfriend, and an overall peaceful, stress-free life in Las Vegas… until Jerry the vampire moves in next door.

Truth be told, I only saw the original Fright Night for the first time a few weeks ago after being intrigued by what the remake looked like it was offering from previews. It turned out to be a classic, cheesy 80s movie in every respect; charming characters – with people who overracted very much in some cases; can’t forget that when it comes to the 80s – a hoaky plot, bad effects, yada yada… And I really loved every bit of it. It was light, and while I usually tend to gravitate towards darkness in my horror films (I didn’t actually get through the first Evil Dead film; go ahead, begin the hate mail) it was such a fun light that I couldn’t help but enjoy myself. With all of this, the 2011 version of Fright Night had a lot to live up to in not only my mind, but the minds of countless other fans of the original, too.

But don’t worry yourselves any longer, my fellow horror fans; Fright Night completely lives up to the original.

As a remake, Fright Night is everything you’d want it to be – it has the humour of the original, the occasional campiness, the clever story, etc. It keeps the entire feel of the first film, yet at the same time, it doesn’t follow the original so closely that it becomes restricting ala Psycho. Because of this, some things are definitely different – the deaths of certain characters, for example, or the total exclusion of others (but really, did any of us notice the absence of Mr. Completely-Pointless-Slime-Monster-Roommate? I think not) but the majority of these changes really worked in Fright Night‘s favor; they modernized the whole thing.

Of course, not every change was for the better. Evil, for example (yes, that’s the actual name of one of the main characters, even if it doesn’t actually fit the new version of him) got totally shafted. In the original Fright Night, he was a weird, slightly flamboyant character with a definite dark streak, which is why he took to… ah… certain events involving his character so well. But the 2011 Evil is reduced to a much more generic, whiny nerd type that was developed much less than the original character. Granted, the development he lacked was given to other characters like Charley’s mother, but this only balanced it out a little, and I definitely missed the flare the original Evil added to things.

The change in some characters was not just the case with Evil, though; many other people in the film were very different from their 1985 counterparts. As I mentioned before, the mom featured a lot more frequently and actually had some relevance to the plot, Peter Vincent was a showman at the height of his popularity rather than an aged, recently-fired TV actor, and the main character himself – well, he’s gotten the hot girl at school, he’s an asshole sometimes, and he doesn’t actually believe that his neighbor’s a vampire until his friend goes missing, which is pretty different from the instantly-obsessed character we got in the first Fright Night. Some of these changes are more drastic than others, but they’re all fairly noticeable when you just pay attention. Overall, however, I enjoyed these changes since they added mostly new things to the story and, as I touched on before, did well with giving the plot a more modern feel.

But enough comparisons to the original film – I’m sure there’s a good amount of you who haven’t seen the first Fright Night and are still interested in this (*pointed look at person who recently did a vlog on new Fright Night who hasn’t seen the original and shakes head at him*). How does it stand as a movie on its own? Well, it depends. Do you want a truly scary, serious film that will give you that haunted look in your eyes and make you wonder for a few days after seeing it whether or not that quiet sound you just heard is, in fact, a monster coming down the hallway to eat you? Yeah, this isn’t your movie then. See my review of Insidious for help on that front. But do you instead want a film that’s not too serious or scary that’s an absolute blast and accomplishes everything a horror comedy should? In that case, Fright Night is for you.

The plot, as I’ve already mentioned, isn’t the most realistic or serious thing in the world, but you really can’t expect something like that when going into this. If you are, then you obviously haven’t seen any previews for this. Go on, go watch one. I’ll wait.

Ah, you’re back! Excellent. Now that you’ve seen some of the previews, you know that the plot doesn’t take itself seriously at all. That’s a good thing considering the story doesn’t even sound like something that could be a drama film even in its most basic form (no, Let the Right One in and its remake are the only movies that can make a vampire moving in next door serious) so instead of trying to force a serious tone on it, they run with the light feel of things.

The characters contribute greatly to this atmosphere, with the extravagent Peter Vincent and intimidating-yet-charming Jimmy the vampire (even the name – Jimmy) sticking out in this regard the most. Sure, the other characters like Charley’s girlfriend, his mom, and Evil were also decent, but Vincent and Jimmy were just so darn entertaining. Vincent is sometimes (well, okay… often) guilty of being a bit of a coward, but near the end he certainly redeems himself by proving that yes, if you’re a showman that only pretends to fight vampires, you still know everything there is to know about killing them. I always knew Chris Angel was legit!

Jerry, well – what can you say about Jerry that hasn’t already been said? He’s awesome, with his sexy charm, sense of humour (wow, it sounds like I’m filling out something for a dating site) vampirism and his subtley intimidating attitude (… a Twilight dating site?). You can’t help but like him, yet at the same time, you can see this underlying viciousness to him that’s undeniable. Of course, I suppose it wasn’t too very subtle… the whole “blowing up the house” thing was kinda pushing the “subtle” boundary. He didn’t keep up the human charade for long.

How good the characters were depended greatly on the people behind them, though, so how did the acting stand up to everything else? Well, it depends on who you’re talking about. Pretty much everyone played their parts decently, with one person in particular standing out as great (you can probably already guess from what I’ve said who that is; I’m predictable, I know) but one performance stuck out as consistently stale; Anton Yelchin, AKA Charley. It’s not that he was terrible – he just did absolutely, positively nothing with the role. Of course, his character didn’t have golden dialogue to begin with, but I can’t help but feel that other people could’ve done more with the part.

As far as stand-out performances go, though, it should come as no surprise to you that Colin Ferrell was fantastic with his part as the vampire next door. This performance certainly makes up for the lead’s; after all, since when has a movie depended on the main character? Ha. You silly, silly readers – the supporting cast is where it’s at! As I touched on before, Mr. Ferrell doesn’t have the best history as far as movies go… Yeah, okay, most of his movies that I can think of offhand actually really suck, but after Fright Night, all is forgiven. He absolutely ran with this role, with his occasional overracting moments fitting in perfectly with the feel of the movie. You could tell just by watching this film that he was having a blast doing it, and it really effected the end result well.

Simply put, Fright Night is one of my favorite films of 2011 so far (granted, the amount of new movies I’ve seen this year is somewhat limited… but that’s beside the point! It’s everything a remake of the classic 80’s flick should be: Fun, charming, with great characters, a clever story and a nice “modern” feel. If you enjoy horror films that don’t take themselves too seriously, don’t miss out on Fright Night.

3 thoughts on “Horrifying Musings of the Fourth Kind: Fright Night (2011)”