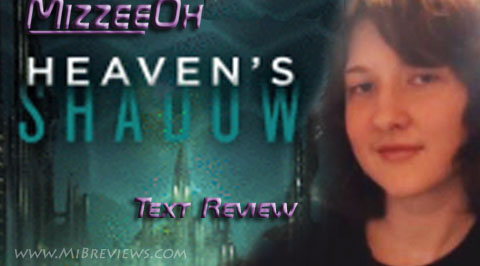 When a Near-Earth Object – designated Keanu – comes closer and closer to the planet, esteemed astronaut Zachary Stewart is given the job of commanding a mission to the mysterious object. Little do we humans know, however, that Keanu is much more than what it appears.

Before receiving a copy of Heaven’s Shadow solely for the sake of reviewing it, I had never actually heard of the novel prior to picking it out of a list of books I could choose from. There were many contenders, all dueling to the death to decide which one would be the winner. Rain poured dramatically from the sky as combatants fought with endless vigor…

… okay, I’ll stop now. No, it wasn’t that sensational, but with Heaven’s Shadow looking like the most interesting one out of the whole bunch, I decided to give this science fiction novel a go – and boy, did I make the right decision. Even if you may not be hearing much about it, this novel is a must read for any sci-fi fan wanting something new to add to their bookshelves. But maybe I should explain a bit more.

Also, before I get on to the actual review, I’ll get this joke out of the way: Keanu. Near-Earth Object = NEO. Woah.

Something that immediately jumped out at me as I read Heaven’s Shadow is how well characters are fleshed out, being portrayed with very human emotions. This may seem like something that’s fairly minor since decent characters are usually easy enough to come by, but come on; any fellow bookworm knows that for every one good author (or, well, “authors” in this case) who writes satisfying characters, there are ten Stephanie Meyers that come out of the woodwork. Let me make it clear, however, that by saying that I definitely don’t mean that all of the characters in the book are super enjoyable. No, some characters were annoying enough that sometimes, my desire to slap them was overpowering. But this was also mostly because people could sometimes be extremely bitchy or panicked, and this fact, in a way, makes the way characters are written even better. Because let’s face it, in the situation in the novel, who wouldn’t be on edge enough that they wouldn’t be in either of those mindsets? I somehow think that an alien starship coming into the Earth’s atmosphere and causing the death of some of our astronauts would make everyone just a little freaked out. Or, well. Except someone like… like… Samuel L. Jackson (what? When I think cool, I think Mace Windu!). Because he’s way too badass to be scared by monkey fighting aliens on this Monday to Friday starship.

But I digress. Very much so actually. Let’s move on.

Heaven’s Shadow throws surprise after surprise at you, even starting from practically the very beginning. It leaves you consistently wondering how the characters will get out of certain situations or just plain wanting to know what will come next since seemingly any character can die at any point. This offers a nice unpredictability to the mix, with things not always turning out how you would anticipate.

This does bring me to one point, though, that isn’t positive, but… not quite negative? Funny, maybe? Yeah, we’ll go with that. You know how, in the official blurb for Heaven’s Shadow, we find out that the aliens are in desperate need of the humans’ help with something? Well, guess what – we don’t find that “twist” out until near the very end of the novel, with up until then the authors building up suspense about what exactly the aliens do want with humans. See the problem here? The blurb spoiled the entire big surprise at the end, making it the only twist the readers can guess very easily (hell, you don’t even need to guess, it’s told to you from the very beginning!. Guys… just, guys. Come on. I’m not blaming the authors here – I can only imagine what you poor guys felt like when you saw that the jacket blurb pretty much ruined the ending – so I’ll direct this to whoever wrote that; if you’re good enough to be writing blurbs for a novel that at least a fair amount of people have/will read, you’re better than this. Seriously.

As far as the basic story goes, there really isn’t much I can say about it; it’s solid, if a bit generic, and I found that it pretty much always made sense (somehow, though, no one ever seemed to find the whole “aliens” thing surprising… That’s some damn good NASA training). It doesn’t exactly offer anything new to the table when it comes to alien plots, but it served its purpose well, and with the consistent twists and turns I’ve mentioned, that was enough to keep it exciting.

The writing was also a pretty high point of Heaven’s Shadow; it all flowed very smoothly, instantly drawing you in with the mood it set. Goyer and Cassutt definitely didn’t glaze over details that were even only a little important – everything, from peoples’ reactions and expressions to descriptions of the settings and environments, was covered very well.

I’m not sure out of the two authors – David S. Goyer and Michael Cassutt – which one did more of the work on Heaven’s Shadow (I’ll just assume for now that it was 50/50) but either way, a great job was done on this novel, with the solid story (even if that aspect was probably the weakest considering how generic it was), realistic characters and writing that had an unmistakeable flow to it. The worst part of this all? That the sequel doesn’t come out until July of next year (at least that’s before the end of the world though. *sigh of relief*). There may be plenty of other books out there with similar general stories, but that definitely shouldn’t prevent you from picking up Heaven’s Shadow for the other great little details.